I was born in Indonesia in 1947, on the island of Java, in Pelantungan near the city of Semarang. Detachment was spreading. The original inhabitants of the Empire of Insulinde were no longer willing to be ordered about by gentlemen and ladies from outside the archipelago.

How did my parents have to dress me after my birth? There was a lack of everything. The library brought a solution. Of the books that were still there, my parents wiped off the linen. My baby clothes are made from the pieces of book linen sewn together. The main colors were old pink, yellow and ocher, colors that my mother liked a lot. They fitted the landscape of Indonesia very well.

On my pillow was written in mirror image: The voice of conscience. My faded vest is titled: Tarzan de Lionman. The name of the writer, Burroughs, disappears halfway through the seam. One of the diapers reads: Only for sinners.
Titles were inevitable. Putting our child to rest on the voice of someone else does not hurt anyone they thought when they chose the titles. They made new covers from found pieces of cardboard and the titles were written in pencil.
The baby clothes show some daring and a talent for improvisation.

Merapi Obermayer was born on September 6, 1947 in Pelantungan on the island of Java. Her birthplace is a leper colony. Her background is Indonesian-Jewish and something unknown. Her mother was a foundling.

The new Indonesian government refused them Indonesian citizenship after which Merapi in 1952 left for the Netherlands with her parents and sister. Here she grew up in a children’s home with the nuns who had a strict and painful regime.

She spent the holidays with her parents in a leper colony somewhere on the edge of a village surrounded by forest and heathland and, like the boarding school, isolated from Dutch society. Only when she was twenty she came into full contact with it.

Merapi made contact with those who, like them, had to give their lives a new turn, leaving behind their past, their pain and their loss. Her arrival to Amsterdam was a natural choice. It was a turbulent period.

With the help of all sorts of artists, Merapi developed herself into a visual artist. She owes a lot to Oey Tjeng Sit in particular. He encouraged her to walk her own artistic way and to find her own language. This prompted her to say: “your own language is the language that you speak the least.”

The ‘Indo no man’s land’ in which she found herself became a source of inspiration.

In 1981 she returned to Indonesia to visit her birthplace. Her return was different than she had thought and she decided to travel. Her first foreign exhibitions took place in Brazil, later New York, Paris, Germany and so on.

Besides her visual work, Merapi is involved in writing. Her poetry is clear, often short and has a strong rhythm. It is often connected with her visual work.

In 2001 publisher Bert Bakker published an autobiographical novel written by her.

In 2007 the novel was rewritten and directed by Patrizia Filia was put on stage with the title ‘The Island’.

Later on of her works consist of photographs, which she calls dream images.  She calls sociobrainsquestions works with the same theme.

Merapi about her work

I call my work “Fragments that pass by”. That is what we are. Our ego ensures that our feet are firmly anchored to this earth. Realizing that we have to make room for someone else, a new life.

Those who do not have a landscape have to put one together  themselves. Artistry helps me to create my own landscape. A landscape that can not be taken away or destroyed by others. A landscape that I always carry with me in which I can bury my desires and bring them back again. My work is rhythmic. Silence and harmony hang like clouds over it. Atmosphere is very important to me. That is what stays the longest, especially for a child. Concrete memories slip through the fingers like sand. Leaving traces of joy and sadness. Events that will always be surrounded by questions. Waiting for the right time to strike. My artistry is not about the deliberate release of my roots. Sometimes you have to bury your roots, out of self-protection, because society demands it. My work always contains traces that betray my background. Their presence is self-evident.

As an artist I have always chosen my own way. I work with material that reminds me of the happy moments of my childhood. Material I find. Fine-meshed. As a child I already had that feeling: materials of which I feel that only I can see what possibilities they have.

My artistry gives me the opportunity to create a bearable present.

My sleep was taken from me in my youth. Later I loved the nights in the city just as the days. Living between their walls I feel like a fish in the water. Cities are more a part of nature than we think. Also cities have their peaceful moments.

Writing has become part of my visual arts. I make word and book objects. I turn my poetry into a ‘symphony’ of letters, numbers and signs. These ‘symphonies’ are a metaphor for stories that the outside world can not reach. Stories that can not be told. Stories that are crushed by the mills of bureaucracy. Those who have a lot of patience can find the key to converting these ‘symphonies’ into a readable whole. 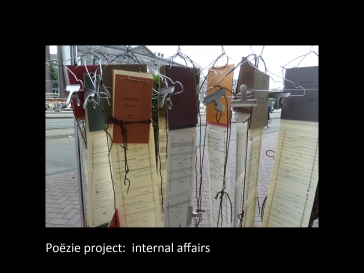